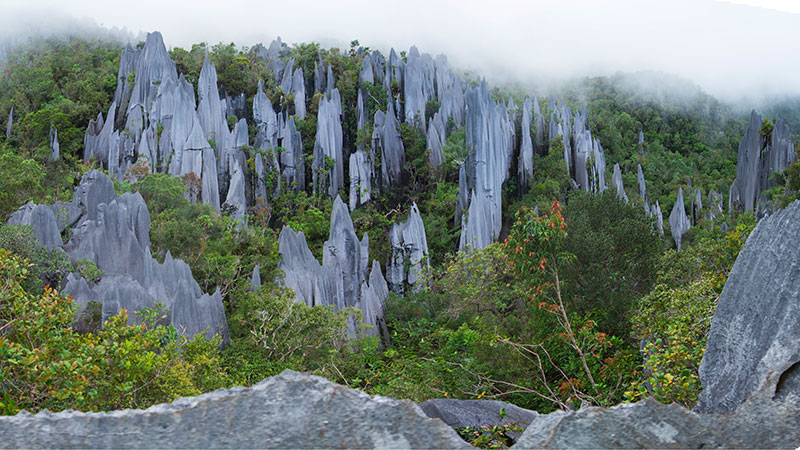 Be prepared to experience many firsts and check multiple wanderlust activities off your bucketlist as you set foot in the mystical East Malaysian wonder of Miri for its premium attraction, Gunung Mulu National Park.

Although a plethora of flora and fauna are enough to plant the idea of visiting Mulu, it is the geological masterpiece of the Mulu Pinnacles and Caves that get travellers out of the house and into this primary rainforest wonderland. The Mulu Pinnacles are a forest of razor sharps limestone spires sprouting from the ground, creating spectacular visuals and evokes astonishment.

Chock full of natural marvels, the Gunung Mulu National Park may not be as widespread as other national parks, but the 54,400 hectares of primary rainforest will take you into world famous and otherworldly caves such as the Deer Cave (the largest cave in the world), the Lang Cave (the largest natural chamber in the world), and the Clear Water Cave (the longest cave in South East Asia). Home to two magnificent mountains, Gunung Mulu (2,376 metres) and Gunung Api (1,710 metres), one can also choose hike along the famous HeadHunter’s Trail, an old tribal warpath, among up to 20,000 species of flora and fauna with 3,500 of which are plant species, 8,000 types of fungi, and a minimum of 170 different kinds of orchids.

A perfect destination for all ages, the Gunung Mulu National Park can prove to be an exciting adventure for the family, an escapade with friends, or couples who are rough on the edge who seek romance in the outdoors.