Explore Life Beneath the Waves, Discover Beauty in the Shocking Blues of Borneo. 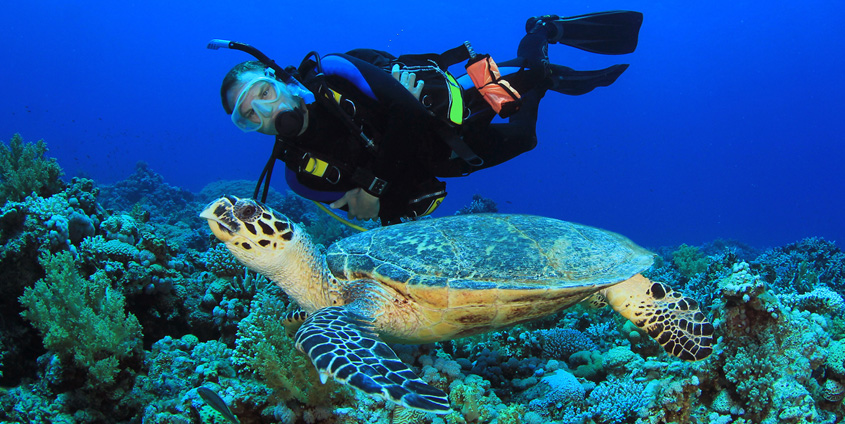 Here in the Land Below the Wind, the sea is as amazing and expressive as the land above. Endowed by nature for its unparalleled richness and privileged by geography as part of the Indo-Pacific Basin, Sabah offers exceptional marine bio-diversity; giving basis to the undisputed claim ‘World Class Diving’. Flamboyant coral reefs and exotic critters run the whole spectrum of colors ─ never short of astonishments and bountiful in your face, It is where it all happens.

Scuba Diving unlocks a new world of experience unlike much else, especially when it’s done right with our highly-trained instructors in the bio-diversity hotspot of Southeast Asia: Sabah, Malaysian Borneo. Many well-seasoned divers have deemed Sabah to be the ‘Pinnacle of Diving’ experience, while the oceans’ greatest ambassador, Jacques Cousteau once said ‘'I have seen other places like Sipadan, 45 years ago, but now no more. Here we have found again an untouched piece of art... a jewel'.

With Scuba Diving being one of the world’s fastest growing recreational sport as well as a major attraction in Sabah, we want to inspire and encourage travelers of all ages to discover new horizons and share the wonders of Scuba Diving in the easily accessible, well-preserved reefs, space and facilities of Sabah. 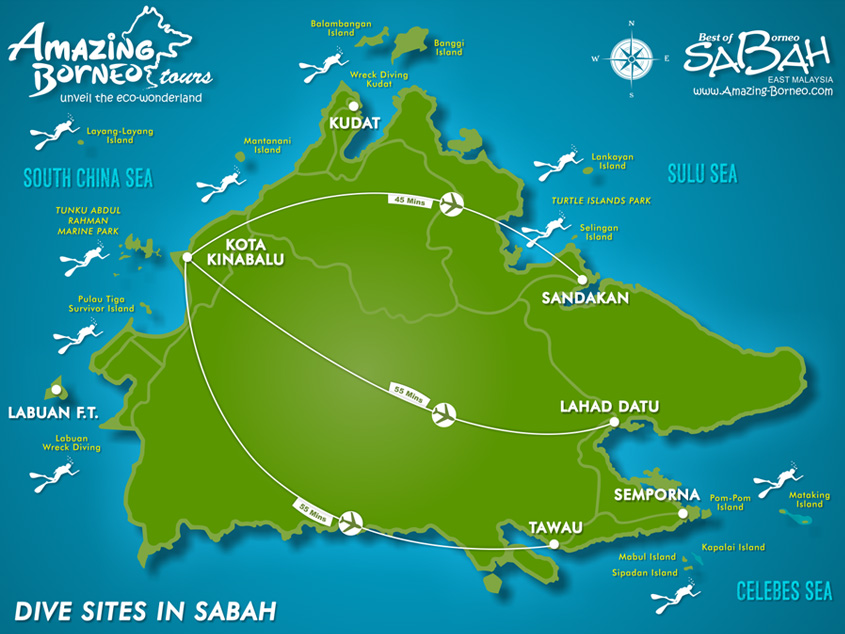 
Sabah offers a variety of experiences depending on where you choose to dive. Besides the famed ‘Sipadan’, there are more reasons to test the waters of Borneo!

Sapi Island is catching up fast as a thriving dive destination, where it’s friendly shore is usually a classroom filled with groups of excited first-time divers. For the more experienced certified diver, there is an artificial reef where anemones provide habitat to four different species of Clownfish and schools of juvenile rock cod, striped catfish and tiny shrimps that shy away under shady overhangs.

Diving in one of the TARP Islands is great for those who wish to learn new skills or just need a refresher before taking on more challenging dives like Sipadan. Each island boasts a ring of healthy coral that slants gently down to the sandy seafloor at approximately 60 to 82 feet with layers of staghorn plateaus, branching plate coral, whip-coral and large, thriving bommies.

Some exciting spottings may also include big shoals of swirling chevron barracuda on the appropriately named ‘Barracuda Bonanza’ dive site. Also the small juvenile hawksbill turtle and some large cuttlefish, you would need to look harder cause they tend to blend so well with the reef.


The Borneo Reef World is an activity pontoon moored to the ocean floor off Pulau Gaya, about half an hour boat ride from Kota Kinabalu. It is the largest in Asia and is equally modern as the ones operated at the Great Barrier Reef, Australia. The Pontoon facilitates exciting activities for any who wish to get in the warm waters of the South China Sea.

Pulau Tiga also is within the protected Tunku Abdul Rahman Marine Park for conservation purposes, which means the reefs are protected and offers a near-to-perfect diving experience. The best time for diving is from April to August, and also doable during February to May. The reefs are shallow and visibility can range from about 6 to 20m depending on the season.

Asmarqa Point, one of the dozen dive sites scattered along the island and is suitable for divers of all levels. This dive site is especially famed as a macro diver’s favorite, and a delight for underwater photographers and marine biology enthusiasts.

Coleman Shoal, another famous dive site on Pulau Tiga is a sandbar, and its underwater world is abundant with wild whimsical critters! This unique dive site is located at the North West of Pulau Tiga and it is a haven for the experienced open water diver. It is an excellent choice for reef and shoal diving, as well as underwater photography and free diving! Diving depths range between 15-22 m/49.2- 72.2ft, while visibility ranges between 5-10m/16.4 – 32.8ft. Here, a diver can expect Black Sea Urchins, cuttlefish, nudibranch, large barrel sponges, lettuce corals, table corals and much more.


A cluster of three islands shimmering in the North-west coast of Sabah makes up Mantanani Islands.

Pulau Mantaani Besar winks at the sun with a beach that stretches up to 2,500meters. This knife shaped island will slice your wanderlust right open with its individual off-the-beaten-track vibe. Divers enjoy dodging the crowds of other commercialized islands and settling for this laid-back of a gem, for its age-old shipwrecks anchored on the shore and the wild whimsy that throbs beneath the crystal clear waters.

The island promises an amazing plethora of aquatic life, with visibility up to 40 meters. Species of rays flutter free, blue spotted rays and marble sting ray amongst large schools of fish. Muck diving is also excellent with spottings such as imperial shrimps, jaw fish ribbon eels, seahorses, pink-eyed gobbles and the flamboyant blue ringed octopus, all amidst nudibranch of all sorts.

For more the experienced diver, level up the fun at “Stingray Avenue”! This dive site is 9 meters deep and just by jumping in for a full 50 minutes, you’ll be greeted by Clown fish, Corals, Stone Fish, Sea Slugs, Starfish, Turtles and perhaps the small spotted Stingray!

The keen and curious traveler can do up to 3 dives a day, including a sunset dive that will drop you back to the lodge in time for dinner.

Don’t know how to dive? Consider the Discover Scuba Program or enroll in an PADI Open Water Course.


The Idyllic island life is 40 second boat ride from Semporna and it sits like a jewel on the Celebes Sea. With waters bristling with turtles, sharks, moray eels, barracudas, and a parade of colorful fishes, it’s a haven for both exotic critters and divers.

The late Jacques Cousteau, a world-renowned oceanographer, once described Sipadan Island as an untouched piece of art while divers around the world have voted it as one of the top five dive sites in the world.

There are no accommodations on the island and those who wish to dive into this azure paradise require a permit. As a result, dive resorts will require guests to stay for three or four days at their resorts where you can test the waters of other surrounding islands before taking on that shimmering gem, Sipadan.

One of the most pristine corners of the world, this tear-drop shaped island is the ONLY oceanic island in Malaysia hosting a rich marine habitat, a treasure trove of unspeakable delights beyond every diver’s wildest dreams.

This world-class dive spot features spectacular natural splendors such as massive greenback turtles, manta rays, barracuda, hammerhead sharks and millions of technicolored reef fish… we could go on and on, from the whimsical coral reef to the weird amazing critters.. but you’ve got to see it to believe it!

Millions of years ago, a dark mass of rock popped out of the Earth’s crust and gradually escalated in width and height, creating a volcano that rose over 600meters, like a pillar out of the sea bed; coincidentally doing so in the very heart of the Indo-Pacific basin. And what a great spot it was to sprout! After some time, corals began to colonize the cone, flourishing as a reef and ultimately forming the strange, shape of a mushroom.

Today, this tiny speck of land is every scuba diver’s fantasy. So very unassuming from above, it is an astonishing cradle of bio-diversity below the surface, intriguing keen divers with all the wild sights it has to offer—brushing against sharks gliding right past you on their daily parade at White Tip Avenue, being confronted by a massive school of Jacks at the drop-off dive site and coming face to face with a Sea Turtle with dark gentle eyes that harbor ancient secrets.

It is so easy to be stunned into silence by the perplexity of shapes and sizes within minutes of entering the waters. As you drift along with the strong currents of the mid reef, you’re swept along and soon introduced to a new kind of traffic--- reef traffic. Harlequin Sweetlips and five-lined Cardinalfish move furtively amidst Table Corals and Gorgonian Fans hanging from ledges. With strong currents come high densities of fish life. Brace yourself because you might suddenly find yourself embroiled in a whirpool of Redtooth Triggerfish, Moorish Idols, Unicornfish and Bannerfish.

The scene changes once you venture out to the waters of South Point: the big pelagic fish run the whole show here. You try to keep the Eagle Rays in focus as they cruise in and out of the darkness with quiet seduction. And as you try to mimic the poise of the Sea Turtles you’ve seen, a massive school of Bumphead Parrotfish barrels into view ahead of you. The hypnotic beauty of Sipadan is dizzying, in the best possible way.


Just half an hour from the south-eastern coast of Malaysian Borneo, this 20 hectare piece of land, 5-10 metres above sea level gem is an oval shaped island basks under the shade of tall palm trees, fringed with a coma of white sand and surrounded by the turquoise water of the Celebes Sea.

Decked with both posh and budget accomodations, honeymooners, backpackers, beach-bums, island hoppers can relish in a lodge that is in favor of their comfort. You can easily walk around it in half an hour. The pathway around the island cuts through a local Bajau village and gives one an intimate glimpse into a traditional lifestyle that is entirely dependent on the sea.

Most people that set foot here, however, have only one thing in mind and that is scuba diving. Mabul has not only become famous for its proximity to Sipadan, but also has a reputation as one of the best “muck” diving sites there is.

It’s a Utopia of exotic underwater critters, many divers choose Mabul as their base to explore it. With fairly shallow waters and low visibility, Mabul has been crowned with the muck diving label. However, with the abundance of tropical marine life, divers armed with a macro lens camera return time & time again to.

The fairly shallow waters and low visibility has earned it the muck diving label, but it is the abundance of tropical creatures that brings divers, armed with macro lens cameras, down here time and time again.


Emerald crystalline waters, silver shores, brilliant blue sky.. welcome the salt in the air, sand in your hair, you have arrived in the island of Kapalai, situated on the charming Ligitan Reef. 30 lavish chalets built on stilts are beautifully laid out along the reef as the Sulu Sea hosts an abundance of micro marine life darting through flourishing corals. With schools of giant Humpheads, Napoleon fish, a plethora of black tip & white tip sharks, turtles, bat fish, jacks, and barracudas, divers from across the globe visit Kapalai to wander into the vast blue bed of wonder.


Resting on one of the pristine corners of the world, this shimmering gem is the ideal getaway for both the avid and non-avid diver. Laced with an intimate charm and natural elegance of luxury, it is an absolute haven for honeymooners, beach bums, dive & snorkel enthusiasts. Also a feast for photographers as you can find yellow nudibranch, leaf fish, giant moray and crinoid squat lobster within the soft and hard coral. Try spotting the notorious garden eel and banded pipefish at the sandy bottom!