Sarawak is well connected domestically and internationally. The largest gateway is Kuching, the state capital, which is 1 hour and 30 minutes from Kuala Lumpur and Kota Kinabalu. It is also accessible via direct international flights from Indonesia (Pontianak, Bali and Jakarta), Bandar Seri Begawan, Brunei and Macau as well as Singapore flying twice or thrice weekly. China's Xiamen Airlines offers direct connections from Xiamen.

Domestic connections from the Peninsula Malaysia available on both Malaysian Airlines and Air Asia. Flights are available from Miri, Sibu and Bintulu airports.

For flights between cities and rural areas in the East of Malaysia, including Sabah & Sarawak, one can look up MASWings.

Sarawak has land borders with Brunei, Indonesia and the Malaysian state of Sabah.

There are several land crossings between Sarawak and Brunei. They are at Sungei Tujuh (on the road between Miri and Bandar Seri Begawan, Tedungan (on the road between Limbang and Bandar Seri Begawan. The latest 60m-long Friendship Bridge across Sungai Pandaruan that separates Brunei’s Temburong district and Sarawak’s Limbang district. (Vehicles can travel uninterrupted from Kuching to Miri, before crossing Brunei and re-entering Sarawak at Limbang before going onwards to Lawas and on to Tawau in Sabah). 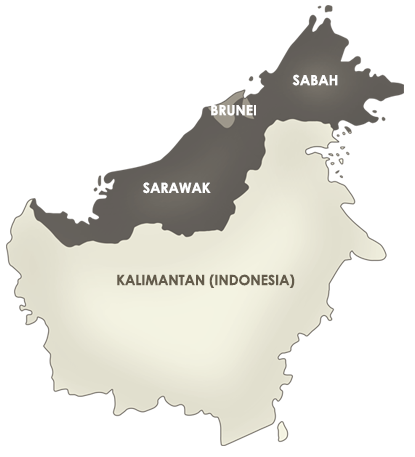 The main crossing between Sarawak and Indonesia is the Tebedu-Entikong checkpoint which lies along the Kucing-Pontianak road. There are many other crossings between the two countries although the legality of these crossings are questionable and are mostly used by locals living in those areas. It is also possible to legally cross the border in the Kelabit Highlands between Bario and Long Bawan.

As Sarawak controls its own immigration matters, there are checkpoints at border between Sarawak and Sabah at Merapok (Sindumin on the Sabah side) near Lawas.

There are direct international buses from Pontianak, Indonesia to Kuching, a direct express bus service between Lawas in northeastern Sarawak and Kota Kinabalu, Sabah as well as bus connections between Bandar Seri Begawan, Brunei and Miri.