A 5 Day 4 Nights Itinerary highlighting the best of Borneo’s wildlife paired with a staycation at Four Points by Sheraton. Explore the depths of Gomantong Cave, cruise along the Kinabatangan river in search of Borneo’s most endangered wildlife, swing by Sepilok to meet your cheeky red-haired cousins the Orangutans and witness the magic of sea turtles nesting on shore and hatchlings racing out to sea in Selingan Island.

Selingan Turtle Island - The Island hosts one of the oldest turtle hatcheries in the world and is one of South East Asia's most important nesting beach and breeding ground for the Green Turtle and Hawksbill Turtle. All environmental conditions on Selingan Island is made ideally safe for Sea Turtles to come and lay eggs, away from predators and all sorts of pollution such as light and noise. It is also a safe haven where baby hatchlings could be released without dangers and disorientation. Also included in this turtle-tastic destination is some fun times in the sun. Stretch out on white sandy shores or go for a snorkel with the marvelous marine life that reign the underwater world.

Sepilok Orang Utan Rehabilitation Centre - 25 minutes west of Sandakan sits The Sepilok Orangutan Rehabilitation Centre, a sanctuary for our endangered friends spanning an area of 10,610 acres. It is a rehabilitation project dedicated to orphaned Orangutan that were rescued from plantations, illegal hunting, or illegally kept as pets.  The boardwalk that leads to the viewing gallery and feeding platform allows you to witness the orangutans being fed milk and bananas. Feeding happens twice a day at 10am and 3pm by rangers.

Gomantong Caves - Concealed within an enormous limestone hill, The Gomantong Cave is Sabah’s most extensive cave systems, well-renowned for bats, swiflets and scattered with prized swiflets’ nest. There are two cave complexes - Simud Hitam (Black Cave) soaring up to 90 meters high and the more accessible of the two, and Simud Putih (White Cave), where the more valuable nests are found. Simud Hitam is a five- minute walk from the registration Centre. A well-maintained boardwalk gives you easy access to do some exploring or watch the skilled harvesters at work.

About Bornean Sun Bear Conservation Centre : Sun bears are amongst the smallest and rarest bears in the world and can only be found in the Southeast Asia region. They are called sun bears due to the white or golden patches on their chest, which is said to represent the sun. They can be easily identified due to their glossy, black coat, which also protects them from overheating and the elements that come with tropical weather. With threats of deforestation and illegal hunting, sun bears are becoming increasingly vulnerable in their own habitats. Efforts to help them have come from both international and local conservation organisations, with the hopes of saving them from the brink of extinction.

Kinabatangan River - Step into one of the World’s biggest habitat for tropical wildlife, welcome to the wild wild Northeast of Sabah. The Kinabatangan River is one of only two known places on earth where 10 primate species can be found, including our red-haired cousins the Orangutan, Proboscis Monkeys, Tarsiers, Slow Loris, Gibbons and also, sightings of the endemic Bornean Pygmy Elephant. The best way to enjoy the river and her wild inhabitants is by jumping on a boat during the early hours of dusk and dawn. However, after-dark on the Kinabatangan River offers a different kind of rumble in the jungle. The wide-eyed freaks come out and the forest comes alive with an ever-changing orchestra of monkeys, frogs and insects. Experience Sabah's wild-side in a whole new light as you set out on a river safari under the starry sky in search of crocodiles, owls, wild cats & other nocturnal animals. Night Wildlife Safari Cruise Complimentary for guests staying in Bilit Rainforest Lodge.

Situated on the river bank of Lower Kinabatangan River, approximately 2 hours drive from Sandakan Town, the lodge is built on stilts from local hardwood materials and are beautifully designed to blend into nature giving a unique local native ambience in the midst of the tropical rainforest. A boardwalk connects the jetty, restaurant and all the chalets. It offers comfort and peaceful relaxation as well as a base for exploration of the incredible diversity of plant, mammal and bird life at the Kinabatangan region. 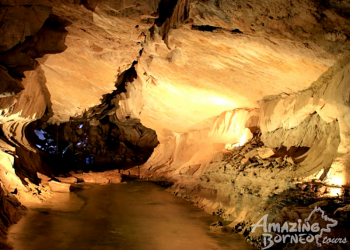 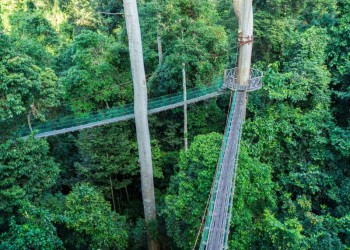