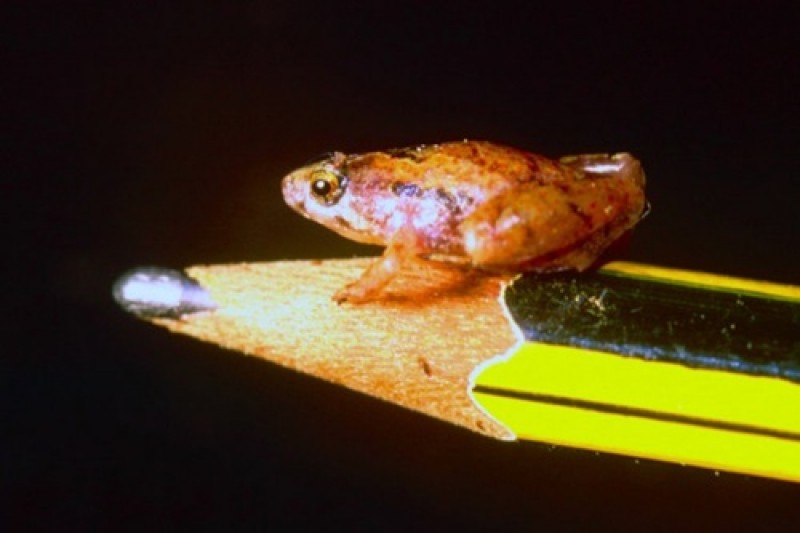 The Island of Borneo is known as the green lung of the world, a land that offers a window into nature at its most beautiful and bizarre ; glow in the dark mushrooms, stalk-eyed flies with hammer-styled heads, hydraulic spiders and carnivorous pitcher plants.

We’re taking you for a walk through the birthplace of some rather "trippy” species, it’s not for the faint-hearted but it’s definitely a treat if you’ve got a zest for the unusual:

Bio-luminescent mushrooms of Danum Valley glow late into the night.

Bio-luminescence, a weirdly beautiful quality of some mushrooms. Because, at the best of times—in the dark rainforest of Borneo, the Fungal kingdom tend to show their eccentric side.

Some Fungi has the ability to glow in the dark. In the case of mushrooms, such an ability functions as a neon advertising sign to attract fellow light-loving insects, not just for a jungle-party but to aid in spore dispersal, so more freaky fungi can colonize new habitats! Fascinating, isn’t it?

Venture into the pristine Rainforest of Danum Valley : http://www.amazingborneo.com/package/danum-valley-rainforest-adventure

2. Tiniest Frog in the world, Once lost now found within a Pitcher Plant in Borneo.

One of the world’s tiniest frog species, which was once considered extinct, was accidentally found by a group of scientist during an expedition in search of the World’s Lost Amphibians. How did they manage to spot this teeny-weeny wonder? Well, although they’re barely the size of a pea when fully grown, there’s nothing small about their loud croaks, definitely loud enough for them to be re-discovered by scientist roaming the dense Bornean Jungle.

The “amphibian symphony” begins to echo throughout the forest as soon as sundown, where males gather within and around the carnivorous pitcher plant that has inspired their name- Microhyla Nepenthicola. Wait, Carnivorous?! Yes, CARNIVOROUS—towards everything else but these micro-frogs. This and a few other frog species have evolved immunity to the digestive liquids of the pitcher so that their tadpoles can develop inside them.

These newly rediscovered miniature-frogs fearlessly live and breed in one of Borneo’s famed carnivorous beauty, the Nepenthes Ampullaria-. The frogs deposit their eggs on the sides of the pitcher, and tadpoles grow in the liquid accumulated inside the plant- but killing other insects such as ants. You’ll be surprised by the relationships between pitcher plants and the creatures living around them. Which brings us to another strange wonder…….

3. The Nepenthes—Carnivorous Pitcher Plants of the Old World

Nepenthes, translates as “soothing grief” from Old Greek, commonly known to humans of planet earth as the Tropical Pitcher Plant, but acknowledged by Monkeys as a Cup to drink rainwater from.

The Nepenthes are the leafy inhabitants of the beautiful and highly complex environment known as Borneo—the center of biodiversity in Pitcher Plants, where 31 species of the Nepenthese genus has been identified. This jungle-dwelling denizen is famed for its flesh-eating ways, a bizarre diet-plan demonstrating their remarkable adaptation to low-nutrient environment they breed in.

Within the beautifully shaped pitchers, various invertebrates, lizards, rats and small mammals are imprisoned and then digested in enzymes to extract precious nutrients—all thanks to gullibility of prey attracted to its nectar secretions and colorations, causing them to slip and plunge deep into their pitfall trap mechanism. Ah yes, deceit is very much alive in the plant-kingdom!

Nepenthes Rajah-- Largest Pitcher Plant in the World only found on Mount Kinabalu, which is home to 25 species of Nepenthes and some of them endemic to the mountain.

Unraveling the mystery of carnivorous plants has boggled biologists for centuries. If you find yourself equally as curious, witness these intriguing beauties for yourself as you thread through the different forest-zones of Mount Kinabalu, where you will see a great variety of Nepenthes, some endemic to the mountain.
Take a Hike : http://www.amazingborneo.com/packages/tours/sabah-mount-kinabalu-packages

4. All eyes on the Stalk Fly

In the case of the Stalk-eyed fly, size do matter—just a little differently. For the Teleopsis Pallifacies, the longer the stalks of the male flies, the more attractive they are to potential mates. The diversity of such a unique species is evident in the Old World tropics such as Borneo, where they can be found near streams and rivers where they feed on fungi and bacteria. Apart from their good-looks, they hold a rather remarkable feature. They are able to gulp air bubbles up into their heads and then pumping those air bubbles into the stalks that support their eyes, an erection that will hopefully impress the ladies (if it is longer than the other guy’s stalk that is!)

During an expedition to study the biodiversity of Mount Kinabalu, a group of scientists discovered 160 new species, 10-15 of which are new species of jumping spiders, including this big-fanged one right here.

Scientifically known as, Myrmarachne but commonly known as the ‘ant-mimicking spider’. In the presence of a predator, they imitate ants by waving their front legs in the air to simulate antennae. When it is their turn to play Predator, instead of waiting for prey to wander into a web, jumping spiders actively hunt for their meals. They don’t particularly have strong muscular legs to uphold their sporty title, but that’s where their internal hydraulic system steps in. Their limbs extend by altering the pressure of body fluid within them, enabling to spring more than 50 times their own body length to land on unsuspecting prey. Besides being jumpy, these fellas are also among the most handsome and charismatic in the spider-world, just check out those big round eyes! What’s not to love?

Phobaeticus chani or Chan's megastick. The longest insect in the world found near Kinabalu Park, Sabah.
With only three specimens found all in the Kinabalu National Park, we couldn’t help but acknowledge its exclusivity, putting it on this list of bizarre creatures. This species is the current title holder for the World’s Longest Insect, measuring at an impressive 56.7cm!

Very little is known about its biology and ecology, despite its enormity. It is believed to inhabit the high rainforest canopy, making it especially elusive and difficult to study, also perhaps due to the fact that it looks exactly like a stick.

Want to play hide and seek with some stick-insects? Greet the great outdoors :http://www.amazingborneo.com/package/kinabalu-park-poring-hot-spring-tour

Ibycus rachelae also known as “ninja-slug”.: Discovered on leaves in primary montane forest at altitudes up to 1,900m on Mount Kinabalu.

At great altitudes on Borneo, highly rare and endemic species appear to stun scientists from all over the globe, including this semi-slug found on Mount Kinabalu.

When it comes to mating, this slug has a slightly more aggressive approach. It shoots ‘love-darts’ made of calcium carbonate to pierce and inject a hormone into a mate, which may play a role in increasing the chances of reproduction. If that’s not strange enough, it also has a tail three times the length of its head, which can be seen wrapped around its body while resting—no need for fancy pajamas here!

It gets all the oxygen it needs through its skin. The loss of lungs helped the frogs severely flatten their bodies. This in turn increased the surface area of their skin, which helps them absorb more oxygen. Evolution? Adaptation to the cold, fast rivers they live in? Scientists believe so. Nobody knew about the lunglessness before scientists accidentally discovered it doing routine dissections. Researchers first saw one of these enigmatic amphibians in 1978, but due to their rarity, just one other specimen had been collected since then and of course, ripping it open just wasn’t an option at the time—until the recent flabbergasting re-discovery, made by a team of 11 frigidly snorkeling and risking hypothermia in Borneo. After 30 years, they were just happy about getting reacquainted with the slippery weirdo, little did they know they were about to unleash another major “World’s First”.

Alien? Nope, even better. A double-headed nudibranch with a self-defense skill that shines brighter than it's underwater cousins.
A double-headed nudibranch (or often casually called Sea-slug) was found off the coast of Sabah's sandbar island, Kapalai. This species of Nembrotha Kubaryana nudibranch roams the ocean floor equipped with both male and female reproductive organs, but never with two heads. This might be the World's very first discovery of a two-headed Nudi-slug!

Nudibranchs are also renowned for their brilliant self-defense skills. The Nembrotha Kubaryana species are posters of their toxicity. With bodies advertising loud hues of orange and green, they warn the ocean at large that their poison ain't nothing to mess with.

Dive into the Depths of Kapalai and you might be lucky to spot it for yourself : http://www.amazingborneo.com/package/kapalai-island-sipadan-kapalai-dive-resort

Dive master Nash Baiti made the find while he was working for film company Scubazoo on August 2015. He believe the double-headed abnormality may have been caused by a birth defect.

With all of the World’s Longest, Smallest and Firsts on our list of strange wonders, it is evident that whichever corner you lurk-- Be it a stroll through the many nature trails in Kinabalu Park, a hike towards the Mulu Pinnacles of Sarawak or an expedition to the summit of Mount Kinabalu, the island of Borneo will leave you with an elevated sense of wonder & appreciation for the natural world…. you just have to look a little closer.