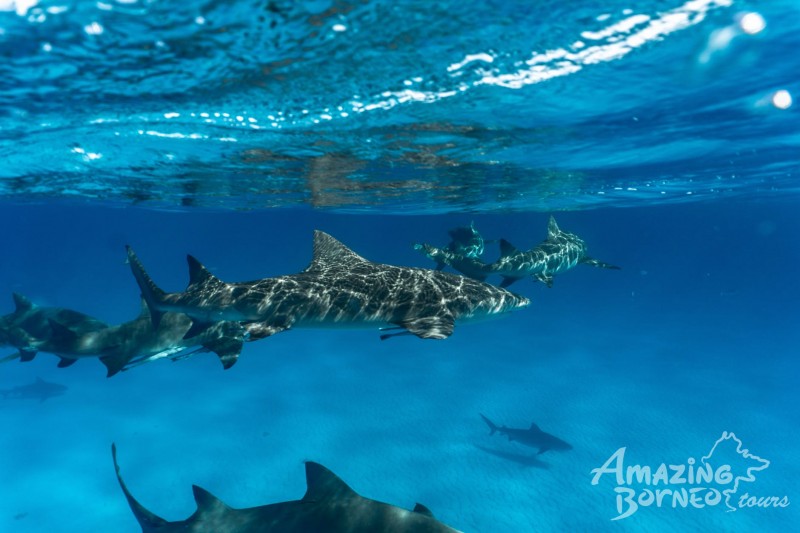 Sabah has its fair share of sharks, with an impressive 50 species calling its waters home. And since it's Shark Week, what better time is there to learn a little bit about these amazing yet misunderstood creatures? In this article, we'll take a look at 5 fascinating sharks inhabiting the waters of Sabah. If you're lucky, you might encounter one during one of your many dives (or even during a relaxing kayaking session)!

The whale shark is considered the largest fish in the world and they can weigh up to a whopping 60 tons! Though they may seem intimidating, it is only in appearance. They are gentle creatures and harmless to humans. They will sometimes even allow divers to swim alongside them! Whale sharks prefer warmer waters so spotting one during diving sessions is possible, especially during migratory season. Whale sharks are also filter feeders, with plankton being a main part of their diet.

One would have never thought that Sabah would have basking sharks. Well, there are but they aren't aplenty. Basking sharks sit just right behind whale sharks in terms of size, making them the second largest fish in the world. Just like the whale shark, basking sharks may appear big and scary with their mouths open most of the time, but that's just because they're also filter feeders. So rest assured they are harmless and gentle creatures. Despite their big size, very little is known of their life history as they have wide home ranges, making it difficult to track them.

Hammerhead sharks are one of the fiercer sharks living in the warm waters of Sabah, especially around Pulau Sipadan (or 'shark' centre). Though its hammer-shaped head may look strange, it actually helps them to locate prey and gives them better visual range than most sharks. Though they have a reputation for being fierce and have been known to attack humans, very few attacks by these sharks have been recorded and they are usually harmless to humans. They are also mostly present in deeper waters and not often seen in shallower waters.

Bamboo sharks can be found living around coral reefs. They are harmless to humans as they are slow moving and spend most of the time dwelling at the bottom of the ocean. They enjoy a diet of invertebrates and small fish, and mainly feed at night. If diving around the waters of Pulau Sipadan, keep your eyes open for them as they are quite small! However, with the bands around their body an obvious stand-out, it won't be too difficult to spot them.

Oceanic white tip sharks are commonly found in warm tropical seas, making Sabah the ideal place for it to call home. They are named so because of the white tips on their dorsal, pectoral, and tail fins, making them easily distinguishable. Their diet is quite diverse and they have been known to eat sea turtles but they usually feast on squid and fish. They are also one of the many shark species that is (literally) always on the go. This is because they are not able to pump oxygen through their gills so constant movement helps them to obtain enough oxygen to keep breathing.

Fancy going for a dive or just looking to relax? Check out here the many sea adventure and diving packages we have on offer!


Let's Cruise with SeaTango! - Top 5 Things to Do
9 Places to Go in Sabah and Sarawak to Disconnect From the World