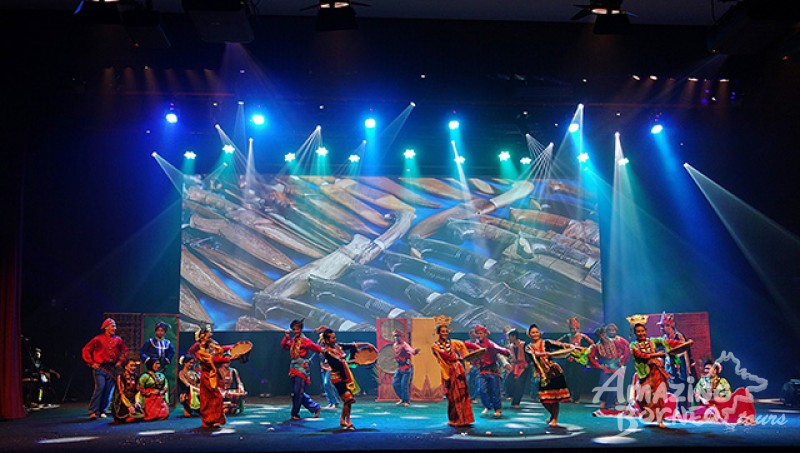 Sabah Fest 2014 blazed a trail of opportunity for many to lose themselves for an hour & a half in the razzling dazzling rhythm of Sabah’s harmonious unity in diversity. A plethora of traditional performances ranging from Tenom Murut Gong, Papar Tanggungak, Putatan Bertitik troupe, Kudat Mongigol Sumundai, Kota Belud Dusun Tindal, Penampang Sumazau & Magaggung, Tenom Anggalang & Magunatip from the West Coast of Sabah.

The Aki Nabalu ushers you into a labyrynth of mystical intrigue, a gripping showcase featuring six ethnic groups in Sabah Malaysian Borneo that rely on Mount Kinabalu as a central feature in their traditional,cultural and religious beliefs.

The Magahau Ritual by the Rungus Tribe.

The Magahau ritual is conducted by the Bobohizan or high priestess to invite the Bambaazon or Rice Spirit for a feast in celebration of a year of bountiful harvest.

The Magahau ritual also provides the opportunity for the people to assemble and chance for relatives, family members and people from other villages to know each other.

Humobot - a ritual performed by the Kadazan tribe of Penampang to summon the spirits of the Bambaazon (rice).

Mongigol Sumundai - A traditional dance from the Kudat and Pitas districts, performed by the Rungus Tribe of Sabah. It is performed both as an entertainment during festivities as well as a ritual dance. Three to eight female dancers are led by a male dancer.

The costumes worn by the female dancers is the traditional Rungus dress –an elaborately weaved top called Banat with a knee-length sarong called tapi, with a scarf-like piece attached to the bodice in the centre in front and through over the back and crossed over with many stands of beads. Sometimes they wear saring or brass arm bangles and also brass leg coils. The music accompaniment is produced by four gongs and a drum called tontog.

The Kumogos Ceremony – before a harvest begins, a Bobohizan/Bobolian (a female spiritual leader of the tribe) will tie up seven stalks of the best rice from a plot of paddy field. These stalks of rice will only be harvested after the particular plot of field has been completely harvested. As a gesture to other spirits who are present among the rice field to not disturb, the seven stalks of rice is scattered all over.

The Magavau is a ceremony ritual performed by the Bobohizans (high priestess) whose task is to search and salvage the lost Bambaazon (rice spirit) who are hurt or separated from the main mystical body.

Monolop - A ritual performed to appease the spirits of Mount Kinabalu.

Modkodim Do Hatot - A ritual performed by the Rungus tribe of Kudat to call upon the spirit of a sick person.

Bobohizan (witch-doctor) from the district of Penampang.

Mohlukas - A housewarming ritual performed by the Dusun Lotud tribe of the Tuaran district.

The Murut tribe (hill people) from the district of Tenom.