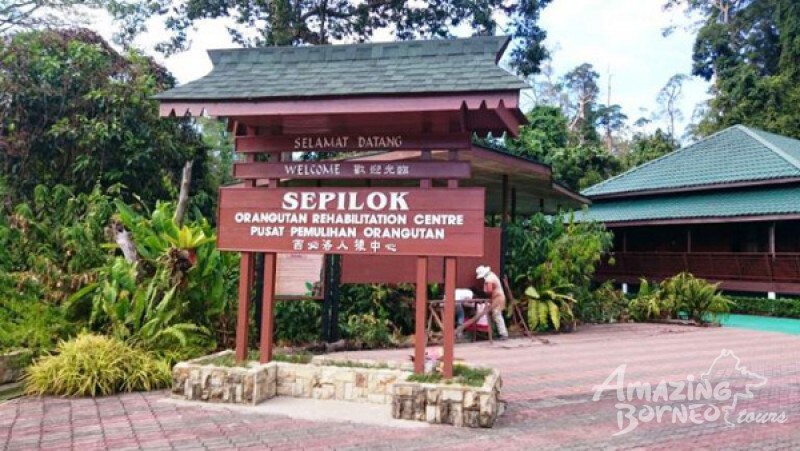 One of the biggest attractions in Sandakan--apart from its raw, untouched nature and glorious food (!)--is its wildlife (read our Kinabatangan blog here). Speaking about wildlife, the most talked about place that is synonymous to Sandakan is Sepilok, which is famous for the iconic orangutan: the wild man of Borneo!

The Sepilok Orangutan Rehabilitation Centre is located at the Kabili-Sepilok Forest Reserve, circa 30 minutes’ drive away from Sandakan Town. The centre was conceptualized in 1961 and was later founded in 1964 with funding by the Sabah State Government. The forest reserve is named after the two rivers--Sepilok and Kabili--that flow into the Sandakan Bay.

Boardwalk leading towards the feeding platform from the entrance.

With the aim to return orphaned, injured or displaced orangutans back into the wild, the Sepilok Orangutan Rehabilitation Centre provides medical and food supplies for orangutans that are either rescued from plantation sites or have lost their way in the wild, unable to fend for themselves. These orangutans are usually kept for several years before being released into the 4,294 hectare Kabili-Sepilok Forest.

The rehabilitation process starts as soon as the orangutans are admitted to the centre. Before being admitted, the orangutans would have to undergo a thorough health examination and a quarantine period to ensure that they are free of contagious diseases.

In the outdoor nursery, the natural forest diet of the orangutan is supplemented with milk and fruits. There is also a platform with a network of ropes to train the orangutans’ climbing skills.

Eventually, as the orangutans reach adulthood, they will achieve total independence and become integrated into the wild orangutan population of Sepilok.

Visitors viewing the orangutan from the feeding platform.

What’s hanging? -- adorable orangutans chilling on a rope connected to the feeding platform.

The orangutan feeding takes place twice a day--in the morning and afternoon. During these times, visitors can witness the adorable antics of orangutans feeding. Some of them are even taught to do some tricks by their caretakers in the centre.

While there are hardly any reported case where the orangutans come close to the people in the centre, visitors are still advised to take care of their belongings and to not be seen holding food, such as crackers or potato chips, or wear bright coloured clothings that may attract the these cheeky ‘men of the jungle’ to come close and taunt you!

Next door to the Orangutan Rehabilitation Centre is the Bornean Sun Bear Conservation Centre (BSBCC), which was established in 2008 to give captive sun bears a better future. With the aim to promote sun bear conservation through rehabilitation, education and research, BSBCC provides rescued sun bears a safe haven to express their natural behaviors in the forest enclosure.

Sun bears, or honey bears, are the smallest bears in the world. Being omnivores, these cute bears love to eat honey, fig fruits and termites. These bears are also expert climbers and can make nests on trees. What makes these bears unique is the crescent-shaped chest mark on their chest that gives them their name.

The sun bears that are kept in BSBCC are commonly rescued from illegal captivity and illegal pet trade. Today, the sun bear’s survival is critically threatened by habitat loss, illegal hunting and killing. In addition to providing shelter for the sun bears, the BSBCC also serves as an education centre to promote public awareness about sun bears, the threats they face and the importance of maintaining their habitat.

Visitors can do their part in supporting the conservation efforts by taking part in the BSBCC Volunteer Program and the sun bear Adoption Program. You can also do the same for the orangutans next door by participating in the Adopt an Orangutan program under the Orangutan Appeal UK. Together, we can make our world safer for these endangered animals. Besides, this world is theirs too.