10 Bornean Fruits You Must Try Before You Die 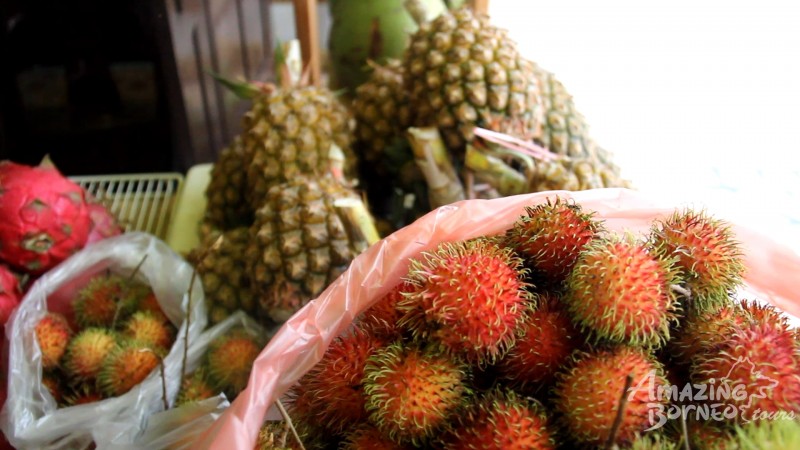 10 Bornean Fruits You Must Try Before You Die

When you talk about fruits in Borneo you have to start with Durian, “The King of Fruits” a highly prized delicacy all over South East Asia. It’s hard, heavy husk can grow as large as 30 cm long and 15cm wide. Durian season is usually around June – August.

Tarap is a strange fruit, resembling a cross between a durian and a jackfruit. The texture of the outer skin is actually soft and once ripened can be peeled easily by hand.

Although the smell is reminiscent of durian, the taste is much more appealing, more like a sweet banana/ice cream kind of taste. Tarap is also a close cousin of the jackfruit and is native to Borneo.

Rambutan really is one of the must try fruits in Borneo due to its pleasantly sweet taste and gummy texture resembling that of a lychee. Its name “Rambutan” refers to its very distinctive hairy appearance. “Rambut” meaning “Hair” in the local Malaysian language.

The Rambutan is also very nutritious containing many vital vitamins and minerals while also being rather high in sugar. Normally Rambutan season in Borneo starts around the end of June and runs into August.

The Mangosteen is a smooth, round fruit with a thick, hard, purple skin encasing a deliciously sweet, juicy, white flesh inside. Its low calorie, high nutritional value makes a valuable addition to your diet and is also a great source of vitamin C.

The fruiting season of Mangosteen is around July – September but be careful when choosing your mangosteens and any damage to the outer layer will cause the skin to bleed a bitter latex into the flesh, causing the whole fruit to be ruined.

Jackfruit is gaining world fame at the moment as a kind of junk food for vegans. This is due to its high nutritional value and unusual taste. Described as being similar to a pineapple crossed with a banana, the jackfruit is the biggest tree fruit in the world growing to nearly 3 feet in length and weighing in at 45kg in some cases.

Jackfruits fruiting season is between June and December and each tree normally produces around 150 fruits with fully grown trees even producing a whopping 500 fruits per tree! There have even been suggestions that mass jackfruit production could be used to ease the worlds food supplies as the human population reaches critically unsustainable levels.

With its vibrant pink and green colours, Dragon Fruit lives up to its name resembling the scaly eggs of the mythical creature. There aren’t any dragons going to hatch from it but it does contain some pretty magical nutritional properties.

Dragon Fruits usually fruit around October – December and we weren’t joking about the health benefits. Containing only 60 calories each while packing a seriously high content of vitamin C, B1, B2 and B3, and also loads of minerals such as calcium, iron, phosphorous.

Mata Kucing, also known as Longan fruit or dragons eye, reveals a transparent, sweet and juicy flesh once shelled. Under the translucent shell you can see there is a dark brown/black seed hence its association with eyes.

This fruits skin resembles that of snake skin, hence its name, yet the feel of it is more brittle. Once pealed the fruit inside is more like a waxy apple. Very tasty and full of healthy vitamins and minerals.

Star fruit does look like it came from the stars, or from some alien planet. The taste ranges from a very acidic citrus when less ripe to very sweet and delicious once properly ripe. The texture should be crunchy with a slight apple flavour to it.

Langsat is a really soft sweet, juicy and delicious fruit that is full of fast burning sugary energy. It tastes a bit like a grape/grapefruit and is also likened to a lychee. Langsat can be found in most tamu and fruit and veg markets around Borneo.