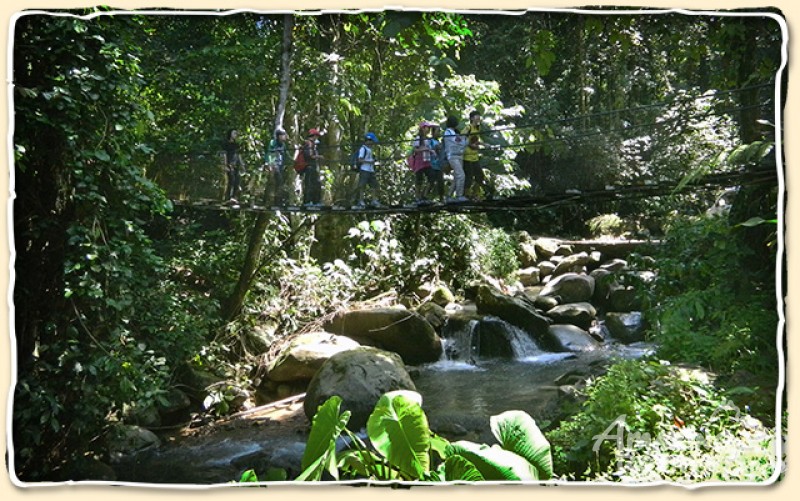 Today we went to Mari Mari Culture Village, the bus picked us up around 9:00 o’clock and the journey took 30 min. The local guide welcomed us and walked with us the whole day. Mari Mari is a village with five different authentic houses which represents five tribes from Sabah. You visit the houses and learn about the history and about how they lived.

To get in to the village you have to cross a suspension bridge over a small river, they must love suspension bridges here. They are everywhere. We think it’s fun because we don’t have those back home in Sweden. The sun was shining and the park was beautiful and blossoming. It was a very hot day and thankfully we got to try both drinks and food from the tribes. During our visit they had a role play and to get into one area the leader of the tribe wanted to meet our group leader. So first we had to decide who was going to be the leader so we could be allowed to enter the area. The leader of the tribe called our leader to a meeting and they went through a ceremony and when they accept each other the group was allowed to enter their home. They thought us to use a blowpipe which was both for hunting and killing, back in the days this tribe was very violent and if you would meet them in the forest they would certainly kill you. Luckily for us we were accepted.

Inside one of the tribe houses there was a trampoline floor build of bamboo and they showed us a game they used to entertain themselves. In the roof about 5 m up they hanged a “prize” that they tried to catch with help from three others to get a good bounce. You also were given the chance to try to jump and get the prize but it was really hard to jump that high you had to have a special technique.

Something that was very commend along the warriors where henna tattoos and if you like to get one they would draw one on you. The tattoos were very beautiful and everyone enjoyed them. It was impressing to see the skills that they had while drawing the tattoo.

Just before lunch time all the groups held a show for us visitors. They showed us their traditional dance and played music and in the end we were all invited you join. During the show they served us fresh lime juice which was very tasty during this hot day.

At lunch we were served a lunch buffet with typical Malaysian food afterwards it was time to say goodbye to our guide and thank him for the day. We jump on the bus who took us back to the city with more knowledge about the population that used to live here in Sabah ages ago.