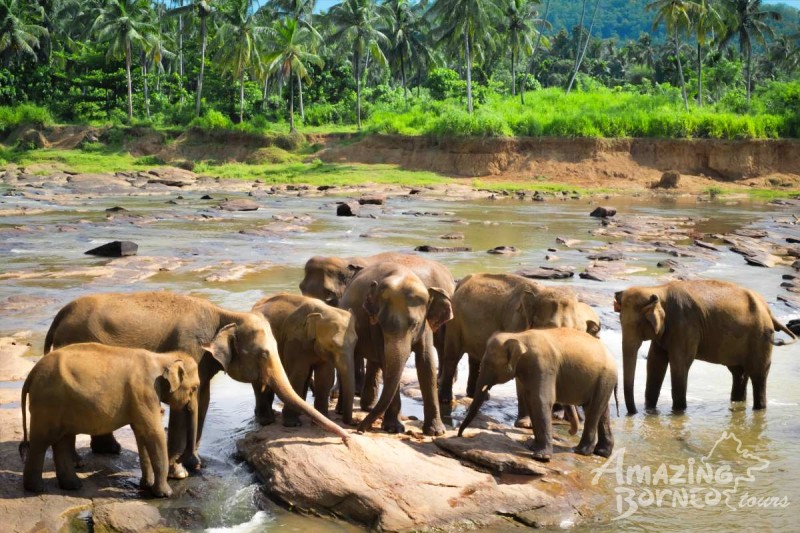 Borneo is teeming with wildlife and you’d be hard-pressed to find them anywhere else. Whether they are superb climbers or brilliant navigators of the jungle, the animals on this list are one-of-a-kind. However, they are all under threat due to human activities such as poaching and illegal wildlife trade. In a few years’ time, these amazing creatures may not be here for future generations to witness. With this list, we hope to turn this around and that it will inspire you to learn more about these amazing creatures and to also spread the word of their ongoing plight.

With Birute Galdikas’ four decades of studying and living with these intelligent creatures in Indonesia, the orang utans (or ‘people of the forest’) are well-known and loved throughout the world. They’re known as the ‘gardeners of the forest’ and play a role in seed dispersal, important to maintaining the rainforest’s health. Their red fur sets them apart from other primates and the fact that they’re the largest tree-dwelling mammals in the world means it would be difficult NOT to spot them when they’re in the trees. They can live up to 1,500m high but are commonly found in the lowlands close to water sources such as rivers. Efforts are ongoing to conserve and protect the orang utans, with the Sepilok Orangutan Rehabilitation Centre and Semenggoh Orang Utan Centre playing a key part.

The Sumatran Rhinoceros is one amazing animal. They are the smallest living rhinoceroses in the world and the only Asian rhino that has two horns! What’s even cooler is that they’re covered in long hair and more closely related to the extinct woolly rhinos than any other rhino species today! The Sumatran Rhinoceros are solitary creatures and despite their name, they can be found scattered around Borneo as well, with a small population living in the Tabin Wildlife Reserve. They are threatened mainly by poaching for their horns and illegal encroachment leading to isolation of rhino communities has led to low birth rates.

The Proboscis Monkeys can be easily identified with their large, fleshy noses which they use to attract mates! Endemic to the jungles of Borneo and found in the Kinabatangan area as well as Bako National Park, proboscis monkeys dwell right by mangroves and rivers. Living next to water sources means they are excellent swimmers, evolving webbed feet to outswim even crocodiles! They also rarely venture onto land unless needed, such as to find food. Much of their habitat is threatened by deforestation and their numbers are dwindling due to hunting.

Elephants have always been important animals in Asia. Since ancient times, elephants have been recognised as a symbol of many Asian countries such as Thailand and India due to their intelligence and excellent memory. They are highly sociable creatures and form groups of six to seven females led by the matriarch, the oldest and most knowledgeable in the group. Much of their wanderings always take them close to water sources such as rivers as they need to drink at least once a day. When going on a river cruise down the Kinabatangan river, you might even be able to spot them! But habitat loss and illegal wildlife trade is a threat to their population, decreasing their numbers from more than 100,000 to 50,000 in the wild.

When thinking about Borneo, the Sunda clouded leopards are probably one of the first animals that’ll come to mind. These forest-dwelling cats are arboreal and spend most of their time in the trees. They are even known to travel through the canopies, probably explaining why it’s so hard to spot them in the wild! Though most cats are excellent climbers, the Sunda clouded leopards are not your average housecats; they are able to climb down trees headfirst due to the flexibility of their ankle joints! However, their habitats are threatened by deforestation and human settlements.

Don’t be fooled by their doe eyes: they may look cute, but cuddly they are most definitely not. Arboreal and nocturnal in nature, the slow lorises look harmless in appearance but their bites are highly venomous and are known to even kill with just one bite. They’re the only venomous primates - yes, they’re primates - in the world. So best to leave them alone, as they are most happy this way. Slow lorises are considered vulnerable and habitat loss together with illegal wildlife trade are their biggest threats, due to their cute appearances.

The smallest bears in the world, the sun bears are more than just cute. They are named sun bears due to a golden-yellow bib-shaped mark on their chest. They are nocturnal and mainly eat a diet of roots, berries, and fruits. As they are solitary and mainly found in remote habitats, little is known about their social life though there has been evidence pointing to them possibly being monogamous. And wanna hear the cutest thing ever? They’re known to cradle their babies too (I know, it’s the cutest thing ever). But sun bears are threatened with deforestation and illegal hunting, mainly for their bile. The Bornean Sun Bear Conservation Centre is a great place to visit as the centre helps to rehabilitate sun bears in natural settings before releasing them back into the wild, where they belong.

Let’s not stop here! We should all do our part to learn more about these incredible animals and play a part in their conservation efforts. Please visit WWF Malaysia for more information on the animals listed here as well as others.